Roman technology is the engineering practice which supported Roman civilization and made the expansion of Roman commerce and Roman military possible for over a millennium (753 BC – 476 AD). The Roman Empire was one of the most technologically advanced civilizations of antiquity, with some of the more advanced concepts and inventions forgotten during the turbulent eras of Late Antiquity and the early Middle Ages. Gradually, some of the technological feats of the Romans were rediscovered and/or improved upon during the Middle Ages and the beginning of the Modern Era; with some in areas such as civil engineering, construction materials, transport technology, and certain inventions such as the mechanical reaper, not improved upon until the 19th century. The Romans achieved high levels of technology in large part because they borrowed technologies from the Greeks, Etruscans, Celts, and others. Rome delivered fresh water to its people by building massive aqueducts that are still an engineering marvel today.The Romans enjoyed many amenities for their day, including public toilets, underground sewage systems, fountains and ornate public baths. None of these aquatic innovations would have been possible without the Roman aqueduct. First developed around 312 B.C., these engineering marvels used gravity to transport water along stone, lead and concrete pipelines and into city centers. Aqueducts liberated Roman cities from a reliance on nearby water supplies and proved priceless in promoting public health and sanitation. While the Romans did not invent the aqueduct—primitive canals for irrigation and water transport existed earlier in Egypt, Assyria and Babylon—they used their mastery of civil engineering to perfect the process. Hundreds of aqueducts eventually sprang up throughout the empire, some of which transported water as far as 60 miles. Perhaps most impressive of all, Roman aqueducts were so well built that some are still in use to this day. Rome’s famous Trevi Fountain, for instance, is supplied by a restored version of the Aqua Virgo, one of ancient Rome’s 11 aqueducts.

Many ancient Roman structures like the Pantheon, the Colosseum and the Roman Forum are still standing today thanks to the development of Roman cement and concrete. The Romans first began building with concrete over 2,100 years ago and used it throughout the Mediterranean basin in everything from aqueducts and buildings to bridges and monuments. Roman concrete was considerably weaker than its modern counterpart, but it has proved remarkably durable thanks to its unique recipe, which used slaked lime and a volcanic ash known as pozzolana to create a sticky paste. Combined with volcanic rocks called tuff, this ancient cement formed a concrete that could effectively endure chemical decay. Pozzolana helped Roman concrete set quickly even when submerged in seawater, enabling the construction of elaborate baths, piers and harbors.

For most of human history, literature took the form of unwieldy clay tablets and scrolls. The Romans streamlined the medium by creating the codex, a stack of bound pages that is recognized as the earliest incarnation of the book. The first codices were made of bound wax tablets, but these were later replaced by animal skin parchment that more clearly resembled pages. Ancient historians note that Julius Caesar created an early version of a codex by stacking pages of papyrus to form a primitive notebook, but bound codices did not become popular in Rome until the first century or thereabouts. Early Christians became some of the first to adopt the new technology, using it extensively to produce copies of the Bible.

The Romans built the most sophisticated system of roads the ancient world had ever seen. These Roman roads—many of which are still in use today—were constructed with a combination of dirt, gravel and bricks made from granite or hardened volcanic lava. Roman engineers adhered to strict standards when designing their highways, creating arrow-straight roads that curved to allow for water drainage. The Romans built over 50,000 miles of road by 200 A.D., primarily in the service of military conquest. Highways allowed the Roman legion to travel as far as 25 miles per day, and a complex network of post houses meant that messages and other intelligence could be relayed with astonishing speed.

Arches have existed for roughly 4,000 years, but the ancient Romans were the first to effectively harness their power in the construction of bridges, monuments and buildings. The ingenious design of the arch allowed the weight of buildings to be evenly distributed along various supports, preventing massive Roman structures like the Colosseum from crumbling under their own weight. Roman engineers improved on arches by flattening their shape to create what is known as a segmental arch and repeating them at various intervals to build stronger supports that could span large gaps when used in bridges and aqueducts. . 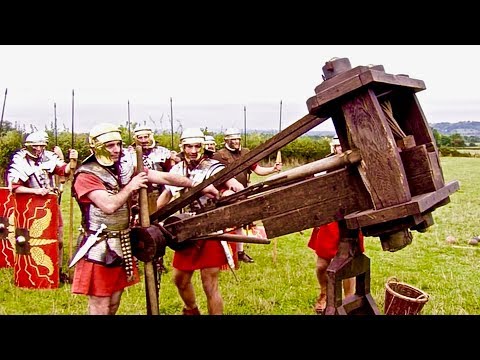 kinda annoyed by the jerky fast fwd video effects in beginning, glad it mellowed out after the start but thats just me.

Have you seen those legionaries from Rome? They have curved shields! CURVED…. SHIELDS!

There was/is no evidence that support the Romans flooding the Collesseum floor and having naval battles. Theres no way this would work. As anybody who has been there in person could attest.

meanwhile, myself along with thousands of others, have proudly worship at Lararia in hour homes and perform rites to the Dii Consenti (& al.) every day.

Always wondered where the term shitty end of stick came from

Im thinking this documentary was published many years ago.. How surprising..July 2018

We need the Roman's back today so we can get back on the right track,They we're more advanced than we can imagine