Kids of today meet the toys of yesterday. Can today’s Kids figure out the Technology of the 1980’s? Audio is separated for Broadcast. Edited by Jeremy Auten

P.S. This was a fun story about the differences between the Past and Present. Please be kind with your comments. It was just for fun. I hope it makes you smile or laugh. Enjoy. . 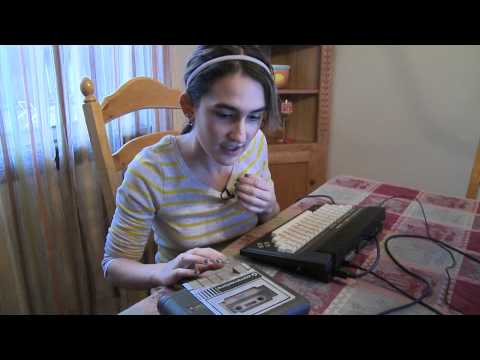 I’m 33 and except for the tape player I’d have the same reaction as these kids.

I remember using a cassette player when I was 2 or 3.. & being pretty damn easy..i guess kids are retards now

POV:: you're probably here for an assignment

This whole video itself is a dinosaur I haven’t seen an Xbox 360 in 7 years, damn I feel old

sheeesh the "modern" technology from 2010 is already looking vintage..

0:46 dont stop beliving i lisent over and over that song , retro technology never dies because it is 100% analog

The problem with many "reaction" videos. These kids intentionaly overreact to appear funny. If you give a gameboy to a 4 year old child, it will just play without thinking.

They should do an early 2000s edition

“Because you wouldn’t be able to use the internet.”

Well, you don’t need the internet to have fun.

The technology of these kids is also old now!

i was born 1980 so i love watching videos like this, i didnt have computers till the windows 3.1 era but i did have the atari 2600 due to having older brothers and i also had the NES, i held onto that stuff till house fire winter of 99. but have since replaced it, i also bought some 8 bit computers just because i like them. apple IIe, trs 80 color computer 2, vic 20, ibm 5150, trs 80 model 3 and a trs 80 mc10 which i dont use, its in the box, those they only made a year before discontinuing them. its a small beginners computer. i also have HO scale trains, just one set then but more now.

This is what happens when you give millennials with boomer technology.

Though obsolete, these old 1980s (and '90s) stuff WERE hi-tech during their time!

People make these videos as if kids today are supposed to know how to work these gadgets and when they fail to work them they get looked and like "bro, pathetic" "look at this loser"

Edit: I mean i'm not going to lie the kid with the atari, its just one button how do you not know how to shoot, that one was kind of self explanatory.

the narrator sounds like he's still in the 80's

OMFG This video gave me a frickin audio seizure. listen to it with stereo headphones

My left side ear enjoyed them talking

Damn even the “new stuff” is. So old now it’s obsolete also I’m 14 in twenty twenty and I know how to use all of these 80’s tech also I just want to say the fact these boomers are saying we can’t use old technology well it’s because guess what I have a computer stronger than nasa’s in the sixties in my back pocket which I can use to program the code of Mario with ease and electrical timing on a car again I’m 14 also hello from the future mullets have returned

Haha this was nostalgic! I loved it! Thanks for sharing!

What is an mp3 player?

Me: 14 y/o who knows how to use everything

Commodore 64 took forever to load to play games it was useless at artari can pop in and play. Cassette tapes getting jammed was problem with tape players years ago.

Cell phones wouldn't exist, except for maybe the President and military, if I had my way. All the microwaves in the environment, and now millimeter waves with the recent 5G rollout, are messing with people's heads and health.

I direct you to Dr. Robert O. Becker's books. Dr. Robert O. Becker, now deceased, believed we were participating in a risky experiment with these new technologies. The naive assumption was made that, if these microwaves don't heat tissue, there are no biological effects. However, we're essentially preprogrammed computers with flesh, and we need the earth's natural magnetic field and its electricity, generated and influenced by the sun, in order to function properly.

The blood-brain barrier is supposed to be impermiable, yet these technologies allow pathogenic microorganisms and other unwanted material to cross this barrier with ease and interfere with our bodies' original 'instructions'. We are now infected with a virus, much like those our computers acquire once hijacked.

Did you know that, much like a salamander, if a child cuts his/her fingertip off before a certain age, it will grow back?

I follow space weather. Each solar cycle lasts approximately 11 years. Over those 11 years, the sun's poles gradually flip. This is my own theory…but every 11 years don't we change and visibly 'age' a bit, beginning with puberty at around age 11? Menopause around the age of 55?

And here's another theory of mine. A woman's period, we're told, occurs approximately every 28 days. Mine? Every 27 days. I found it interesting to learn it takes the sun just a wee bit over 27 days to make one full rotation. I actually believe menopause is a disease, but the field of research is dominated by men who pride themselves on their ability to produce sperm until death. Yet a woman's ovaries konk out by age 55? I don't think so.

Cancer. Why do we study each independently? There is one commonality between all. The body is repairing an area of inflammation, and the 'off' switch gets jammed.

Another theory I have is that pathogenic microorganisms, coupled with the faulty electricity that allowed them access to invade and/or reproduce without resistance, are involved in nearly every disease, including cancer. There IS a relatively small amount of research being done on the role of pathogenic microorganisms in disease, cancer included. None that I know of on the role of how electropollution might factor into the equation. Remember though that microorganisms contain magnetite, so they respond, not only to the sun, but to all of the man-made microwaves encompassing our planet today. Viruses, for example, require living tissue to survive, their sole purpose being to reproduce. They can inject their DNA into cells and take over the cockpit, so to speak. Several cancers have already been linked to viruses.

This past spring I was changing the time on my clock radio, 'springing forward'. I was using my cell phone as reference, and I heard a lot of static. Normally I would've pulled my cell phone away once my phone was close enough for me to hear any static, but I was lazy this year. The clock radio no longer keeps time, and not by only a few minutes. It is hours off and now unusable.

If the radiation emmitted from a cell phone can do that to a clock radio, is it possible that these microwaves are interfering with our natural 'internal clocks', including our life spans? We may be living longer, but are we living healthier? I even sometimes wonder if all of the 'electropollution' in our environment today is confusing the sun, as solar cycles of recent decades have been much weaker. Something to ponder…

I'm a 90's baby and yet I could easily work a tape deck and an Atari no problem by the time I was 5. Guess it goes to show how much things really have changed. I mean I tried to show my youngest nephew who was about 9 at the time how to play a game on the SNES and he said it was stupid. Just because he didn't know how to play the game or even work the system that his sister and I grew up playing. It makes me sad that we don't try to keep the old tech alive, it's all about the new and exciting stuff and the old gets tossed to the side and forgotten about.